HomePod resembles a small mesh-covered Mac Pro. It has a cylindrical body with a flat top that is outfitted with a 272 x 340 display that shows a Siri waveform when activated. Built-in touch controls are included to play/pause music and adjust the volume. 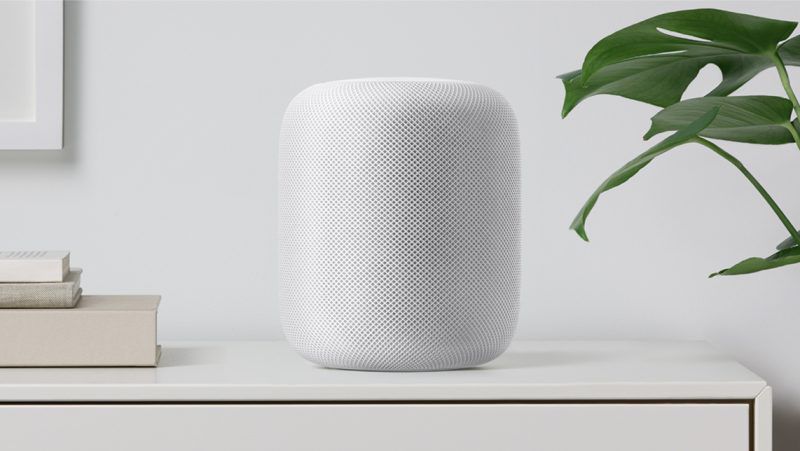 Measuring in at 6.8 inches tall and 5.6 inches wide, the HomePod comes in Space Gray or White, and aside from the mesh fabric and the waveform LED at the top, there are no other external markings on the speaker, so it has a clean, simple design that matches with a range of interior decors.

HomePod includes a removable power cable, which is covered in a fabric much like the fabric of the speaker itself. While it can be disconnected by pulling on it with significant force, Apple does not recommend removing the cable.

The HomePod supports several gestures using the aforementioned touch controls at the top of the device. A tap pauses/plays music, while a double tap swaps to the next track. You can go back to the previous track with a triple tap, and a touch and hold brings up Siri (with a visible waveform to indicate when Siri is listening).

HomePod is filled with sophisticated hardware dedicated to providing the best possible sound. At the bottom, there’s a custom seven beamforming tweeter array, each with its own individual driver. Precision horns drive audio from the inside of the speaker out through the bottom with what Apple says is “tremendous directional control.”

Above the tweeters, there’s a six-microphone array that allows the HomePod to hear spoken Siri commands even when loud music is playing, and above the microphones, there’s a 4-inch upward-facing Apple-designed woofer that has a powerful motor to move a lot of air, resulting in deep bass. The speaker uses automatic bass correction powered by a low-frequency microphone and dynamic software modeling to keep sound distortion free even at loud volumes. 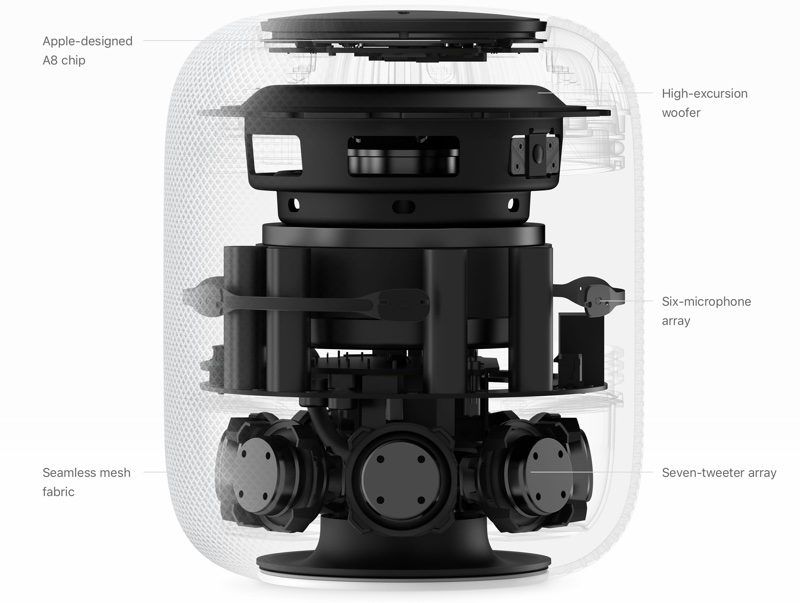 At the top of the HomePod, there’s an Apple-designed A8 chip, which is the same chip that was first introduced with the iPhone 6. It’s a lot of processing power for a speaker, and Apple says it’s perhaps the “biggest brain ever” built into a speaker. The A8 chip powers capabilities like real-time acoustic modeling, buffering, upmixing of direct and ambient audio, and multi-channel echo cancellation, and inside, there’s 1GB RAM and 16GB of flash storage, even though there’s no way to store music on the device itself.

HomePod uses spatial awareness to intelligently detect the room around itself, automatically adjusting and balancing audio to take full advantage of its environment to fill a room with sound regardless of where it’s placed, and this was independently tested and confirmed to be true. According to Apple, HomePod also uses an advanced algorithm to continually analyze what’s playing, dynamically tuning low frequencies for smooth sound.

We’re hitting on something people will be delighted with. It’s gonna blow them away. It’s gonna rock the house. — Apple CEO Tim Cook on the HomePod

Setting up a HomePod is as simple as holding it next to the iPhone, similar to the setup process for AirPods.

Two HomePods are able to work together as a stereo pair for an even richer sound as of the 11.4 software update, and with multiple HomePods in different rooms in a home, the AirPlay 2 protocol can be used to control audio in every area of the house. AirPlay 2 is also available in third-party speakers, allowing for whole house audio using a range of different speakers.

HomePod integrates with Apple Music, Apple’s streaming music service. It connects directly to Apple Music in the Cloud over WiFi, so it is able to access a user’s music library, complete with playlists, customized music mixes, and preferences.

HomePod also supports a shared Up Next music list, so all of the people in a home can contribute to the music playlist, and HomePod can accept commands from anyone in the home once linked to an Apple Music account.

If you don’t have an Apple Music account, HomePod works with iTunes Match and iTunes Music purchases, and you can use AirPlay from your other Apple products to play music from streaming services like Spotify.

As outlined by Apple, HomePod (and Siri) work with the following music sources:

When streaming music from Apple Music, HomePod did not originally count towards your device limit, allowing you to stream music to HomePod and your iPhone or Mac at the same time. Apple changed this feature in January 2019, however, and it is no longer possible to play music on HomePod and another device at the same time with a single-person Apple Music subscription.

Songs streamed on HomePod do, by default, affect the music recommendations of the “For You” tab on Apple Music, but if you want to play music that’s out of your traditional wheelhouse on HomePod, like if you’re having a party, you can open up the HomePod and toggle off the recommendation setting to prevent it from impacting your “For You” suggestions.

Disabling this setting also prevents HomePod from adding content to the “Listening To” section of your Apple Music profile that catalogs content you’ve played on Apple Music.

HomePod does support Bluetooth 5.0, but it is not able to play music from non-iOS devices using a Bluetooth connection.

According to Apple, a key ingredient for an in-home smart speaker is a musicologist, which is Siri’s role in HomePod. Siri has been updated with a greater understanding of music-related data, allowing the personal assistant to answer a much wider range of music-related questions.

Through the aforementioned integration with Apple Music, Siri can make music recommendations based on personal tastes, aiding in music discovery, and the assistant can make note of what a user likes. Questions and commands that work with Siri on HomePod include “Play more songs like this,” “Play something new,” “Who’s singing?” and “Play more like that.” A sample of music-related Siri commands is available in the image above, shown on stage at the WWDC keynote. Siri is able to play content from your iCloud Music Library, Apple Music, or iTunes purchases.

Siri is also built to be a home assistant. Siri isn’t limited to music and can answer queries around a wide range of topics, doing things like sending messages, making phone calls, setting multiple timers, offering weather updates, making calendar appointments, and more. Siri can answer queries from any person in the house, with Siri functionality not limited to a single user.

When the primary user is not home, however, Siri access is restricted to Apple Music — features like sending texts and creating reminders are not available. The HomePod is tied to the primary user’s iCloud account and the expanded access to all features shuts off if the user’s iOS device is not on the same network.

HomePod supports speakerphone functionality and is able to serve as a speaker and a microphone for a voice-based call. Anyone in the home can start a call on their iPhone and then switch it over to the HomePod using Handoff.

Apple built HomePod with privacy in mind. Siri is activated through a “Hey Siri” command, and until those words are spoken, HomePod is not listening to conversations in a room. Once the “Hey Siri” command is said aloud, data is sent to Apple’s servers using an encrypted and anonymous Siri ID. All communication between HomePod and Apple’s servers is encrypted and anonymized to protect user privacy. More detail on how “Hey Siri” works on HomePod is available via Apple’s machine learning blog.

At launch, Siri is available in English (UK, Australian, US, and Canadian) French, and German.

HomePod, like the Apple TV and the iPad, serves as a HomeKit hub. As a HomeKit hub, HomePod enables remote access for HomeKit devices, allowing them to be controlled when a user is away from home.

Through Siri integration, HomePod is also able to control all of a user’s HomeKit devices, similar to what’s possible on an iPhone or iPad.

Apple provides regular updates for the HomePod, much like it does for iOS devices, Macs, the Apple TV, and the Apple Watch. Software updates are released alongside iOS software updates and can be installed using the Home app on the iPhone or iPad.

As of the release of the 13.4 software, HomePod’s OS is based on tvOS, instead of iOS. This hasn’t resulted in any fundamental changes to how the HomePod software works, but it may be an update introduced in preparation for a smaller version of the HomePod.

It could also be a change made ahead of the release of iOS 14, which may drop support for devices running an A8 chip like the HomePod, or to make the HomePod and the Apple TV easier to pair in the future.

Be the first to review “HomePod” Cancel reply
Brands